A parallelism is a literary structure in which two or more series of statements are set next to each other for comparison or contrast. It's a very common poetic device used in Hebrew literature. Sometimes an author will arrange his text in a parallelism only for the poetic effect, but sometimes it's also to lead the reader to a deeper, implied meaning. The Bible is full of parallelisms, more so in some texts like the Psalms than others, like the books of the Kings.

A chiasm is another literary structure that juxtaposes two series of statements, words, or ideas, but in a chiasm, the second series is in reverse order. Frequently--but not always--there is a central point, like an axis. Chiasms are common throughout the Bible, but not as common as parallelisms.

I have a growing list of Biblical chiasms and parallelisms here.

Things get really exciting when these literary structures overlap or are embedded within each other.

A Chiasm Embedded in a Parallelism

Chiasms can be embedded within chiasms or parallelisms, and vice versa.

Proverbs 9 contains just such a structure. It is organized into three main parts: 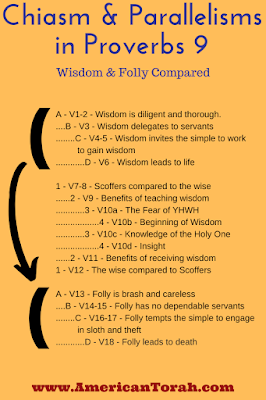 Verses 1-6 describe wisdom, personified as an industrious and generous woman. It's parallel in verses 13-18 describes folly, personified as a brash and lazy woman. Between the two parallel passages, is a chiasm on imparting and gaining wisdom, with yet another parallelism at its center.

Over at American Torah, I'm going to expand on this chapter and talk about what we can learn from the three divisions. I'll add links below.