Why the Didache Could Not Be Included in the Canon

The first rule for any writing to be included in the Biblical canon is this: It must not contradict what came before.

The second rule is this: It must be true.

The Didache is a late first-century Christian writing that purports to be a summary of the teachings of the first apostles to the churches that they planted across the Roman Empire.

Years ago when I first read it I wondered why it wasn't included in the canon. From a cursory reading of history, it appears that it almost was. In fact, a number of ancient Christian groups did include it in their own version of the Bible. I can't tell you exactly why the Church Fathers decided that it didn't measured up, but I can tell you a few reasons that their decision was correct.

The Didache starts out beautifully: Love God, love your neighbor, keep the commandments, avoid sin, don't mess with sorcerers or astrologers, be meek and long-suffering, etc. The first seven chapters are all fantastic advice and align perfectly with all of the Scripture that came before it. 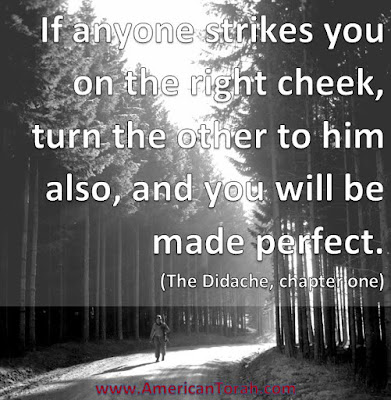 However, it gets a little off track when it discusses fasting and prayer in chapter 8.


But let not your fasts be with the hypocrites, for they fast on the second and fifth day of the week. Rather, fast on the fourth day and the Preparation (Friday). Do not pray like the hypocrites, but rather as the Lord commanded in His Gospel, like this:

Our Father who art in heaven, hallowed be Thy name. Thy kingdom come. Thy will be done on earth, as it is in heaven. Give us today our daily (needful) bread, and forgive us our debt as we also forgive our debtors. And bring us not into temptation, but deliver us from the evil one (or, evil); for Thine is the power and the glory for ever..

Pray this three times each day.

-From the Roberts-Donaldson translation of The Didache.

Who are these hypocrites and why should we avoid fasting on the days they fast and why do we need to fast on Wednesday and Friday instead? Since when should we care what the hypocrites do so long as we aren't hypocritical with them?

The "hypocrites" in this mini diatribe are probably Jewish believers who refused to abandon the traditions that they had been taught. The problem, of course, wasn't hypocrisy. It was fear and hatred. Anti-Jewish sentiment was rampant in the Empire at the time. Titus had just destroyed Jerusalem, killing as many as a million Jews, and scattering the remainder.

Many of these new gentile Christians were afraid to be mistaken for Jews. To make absolutely certain that wouldn't happen, they often made a point of being more antisemitic than their non-Christian neighbors, of deliberately changing the traditions they were taught by the Apostles so that outsiders could easily tell the difference between Jew and Greek.

They exchanged the commandments of God for the traditions of men and divided what God had joined together.

Some of those new traditions were invented solely for the purpose of separating Jew from gentile, while others were simply borrowed from the familiar pagan religions they had supposedly left behind. They stopped keeping the feasts as they had been commanded by God and taught by Yeshua. They changed the dates of God's appointed times, changing the Sabbath from the seventh day to the first and moving the dates of other feasts to coincide with existing Roman celebrations.

I'm not saying they were all cowards. Some of these men were courageous martyrs for the faith, willing to die rather than to renounce Jesus, however mistaken they might have been about some of his teachings. The foundation of their faith in Him was still solid as no one has ever been saved by doctrinal purity or proper adherence to ritual. But that doesn't mean they were without fear altogether. Courage isn't the absence of fear; courage is action in spite of fear.

Fear can have a profound effect on one's priorities. If you have to go the bank and you find out that there's a holdup in progress, you might also discover that a trip to the post office was really more important anyway. Faced with the prospect of persecution, we all instinctively look for ways to deflect it, whether by shuffling priorities, offering up "bigger" villains, or by convincing ourselves that some compromises are more acceptable if they make it harder to pick us out from a crowd. Those early Christians were no different and Satan took full advantage of their human weaknesses.

Passover moved to a new date and many Passover traditions morphed into completely separate new holidays and rituals like the Eucharist. The traditional period of study and fasting between Purim and Passover merged with pagan traditions to become Lent. Shavuot became Pentecost. And so on.

This wasn't an overnight event and it wasn't without contention. There was significant disagreement between various congregations during this process, but the unrelenting consolidation of power in the hands of a few who actively discouraged the masses from studying the Scriptures for themselves caused the actual traditions given by the Apostles to be subsumed beneath a syncretism of the new "Jewish" religion with the older, more comfortable paganism.

It is possible--perhaps even probable--that the passages concerning "the hypocrites" and the Eucharist (aka Feast of Gratitude, which is a little closer to its origin in Passover than the English term "communion") were added or modified by a later editor and were not part of the original. Numerous references to keeping the commandments of Torah show that The Didache was penned before the corruption had set in too deeply. It's too radically pro-Moses, which is one of the reasons I love it despite its flaws. If that is the case, it's impossible to tell for certain which segments are pure and which aren't.

I encourage all believers--Jewish, Catholic, Protestant, Messianic, et al--to read the Scriptures for themselves, beginning with Genesis. It's a huge mistake to start new believers with John or Romans. Would you start a house by making the doors and windows first or by laying the foundation? Everything that comes later builds upon what came first. The Apostolic Scriptures are all based on the Torah and filled with plain and oblique references to Torah and the Prophets. Without a good understanding of those older Scriptures, the newer ones can only be read out of context and can be very easily misunderstood.

Study the Scriptures and you will be much better prepared for sifting through writings like The Didache and the various letters of the early church fathers. Without studying the Scriptures, you'll be perfectly prepared to be deceived.
Posted by jay c

I am in the process of migrating posts between several platforms. Expect content to shift as time goes on. I'll try to leave a link to the new location if anything on this blog moves elsewhere.
Full disclosure: Some links may include affiliate codes, which means I will earn a small commission on anything you purchase after clicking on that link.